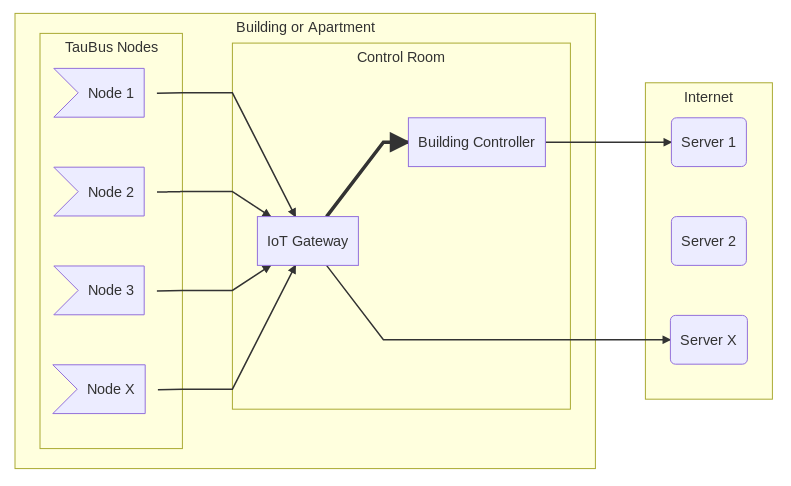 We have codenamed our Ultra Low Power Wired Internet of Things Network as “TauBus”. About the novelty of the Physical Layer data messaging you can read from our other posts and news.

This article describes big picture about how we see the TauBus is used in IoT system and how the data is connected into internet infrastructure. Following drawing depicts generic view of the actors in the network.

The Building or Apartment is defined based on security considerations. Nodes are connected to IoT Gateway device using single stream connection. The TauBus relies on physical protection on security where it is assumed that the physical access to the bus is not possible without having trespassing rights. The IoT Gateway’s responsibility is to create the internet / ethernet connections with building automation controller and internet servers using encrypted streams. The IoT gateway creates exactly one connection per Node into internet.

The IoT Gateway does have web interface, where user can conveniently specify the route to where some specific devices will be connected to. Also, the node may inform the IoT Gateway what would be the default connectable internet server address.

The Building Controller may be a logical device inside IoT Gateway. For example, when the forwarding of an application data from multiple devices on the TauBus using JSON notation and it has been standardized how to address specific node inside JSON object, then it is possible that the IoT Gateway does merge single data streams from all the nodes with single stream on the ethernet side. In this case, the Building Controller will act as JSON data multiplexer. Also the virtual controller may implement the Message Broker for MQTT that does place every node under its own subdomain at the simplest case.